Terror lynchings in the American South were not isolated hate crimes committed by rogue vigilantes.  Lynching was targeted racial violence at the core of a systematic campaign of terror perpetrated in furtherance of an unjust social order.  Lynchings were rituals of collective violence that served as highly effective tools to reinforce the institution and philosophy of white racial superiority.

Today public and private institutions in the South memorialize the Confederacy and celebrate the architects of white supremacy while remaining conspicuously silent about the terror, violence and loss of life inflicted on black Americans.  — Lynching in America: Confronting the Legacy of Racial Terror by the Equal Justice Initiative

I’ve admired the Equal Justice Initiative (EJI) and its founder, Bryan Stevenson, for decades.  We, therefore, built our trip South around their opening of The National Memorial for Peace and Justice.  The memorial and a related museum are a powerful attempt by EJI to combat that conspicuous silence.  Its power is amplified by painstakingly thorough historical documentation, masterful use of language and technology, teaching plans for schools, and an integrated effort to tie this site in Montgomery Alabama to each of the more than 800 counties across our nation where lynchings occurred – helping us face this legacy.

This post will be long and a difficult one to read and it will rely heavily on the words of EJI and others to make sure I get it right.  But it strikes me that it is a story that Bryan Stevenson is best poised to tell.  He has spent his life defending those convicted to death and those sentenced to die in prison (reflective of the power of language, Bryan does not talk about life imprisonment, rather he employs this term – sentenced to die in prison – in order to force us to recognize the gravity of this harsh sentence).  His book Just Mercy is a powerful chronicle of failings in our legal system especially for African Americans.  He has won many Supreme Court cases establishing powerful legal precedents and succeeded in freeing over 125 innocent men and women.  But not all were innocent, so he speaks from experience when he says:

If I believe that each of us is more than the worst thing he’s ever done, I have to believe that for everybody.  But the history has to be acknowledged and its destructive legacy faced.

So I’m trying not to flinch but as you’ll see the history of lynching is much much worse than the gruesome references I learned in my youth.

The very site of the memorial is powerful.  From its hillside, you look over the Montgomery skyline, the streets where slaves were sold and the State Capitol that once housed the confederacy.  The week the memorial was opened to the public was also the week of Confederate Memorial Day, a state holiday, and television stations carried a campaign commercial from the Governor lauding legislation that had passed to make it more difficult for localities to take down or move Confederate monuments.

Alabama doesn’t need “folks in Washington” or “out-of-state liberals” instructing the state on what it should do with Confederate monuments.  – Governor Kay Ivey

The lynching memorial consists of a walkway with 800 weathered steel columns hanging from a roof. There is a coffin sized column for each American county listing the people who were lynched there.  As you walk next to the columns, the floor steadily descends and by the end they are dangling over your head, eerily reflecting the image of bodies hanging from tree limbs. 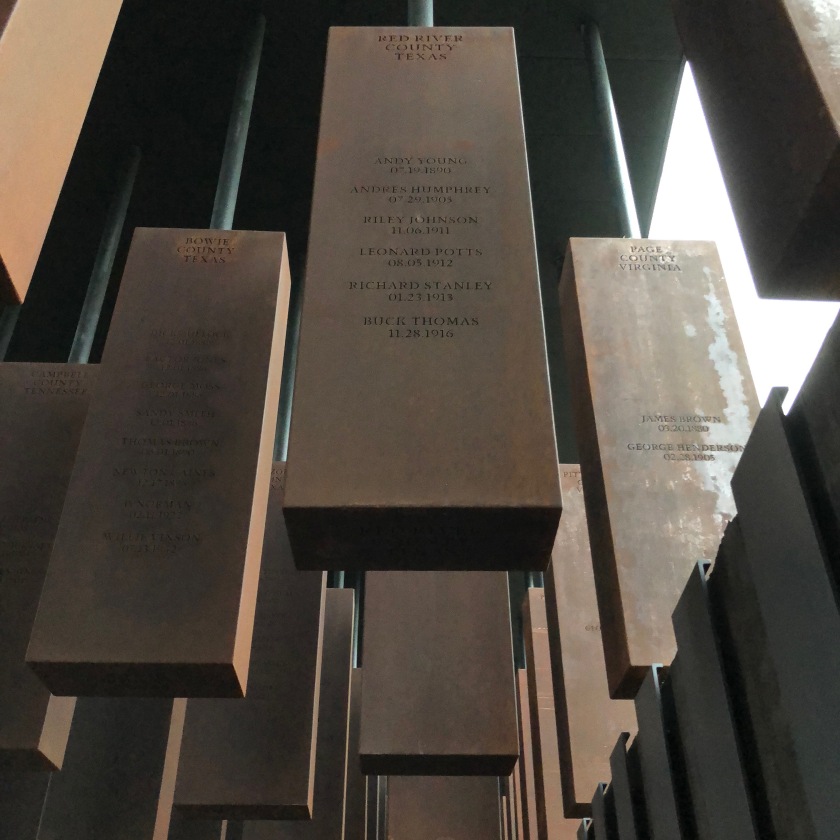 The scale of the killing is horrific.  EJI has documented more than 4,000 lynchings in more than 800 counties.  The reality of each tears at your soul as you hear why and how these barbaric acts were undertaken and you realize they were not isolated events.

In April 1906, two black men named Horace Duncan and Fred Coker were accused of rape in Springfield, Missouri.  Though both men had alibis confirmed by their employer, a mob refused to wait for trial.  Instead, the mob seized both men from jail, hanged them from Gottfried tower near the town square and burned and shot their corpses while a crowd of 5,000 white men women and children watched.  Newspapers later reported that both men were innocent.

In 1927, John Carter was accused of striking two white women in Little Rock, Arkansas.  He was seized by a mob, forced to jump from an automobile with a noose around his neck, and shot 200 times.  The mob then threw Mr. Carter’s mangled body across an automobile and led a twenty-six-block procession past city hall, through Little Rock’s black neighborhoods and toward Ninth Street, which was the black community’s downtown center.  At 7:00pm at Broadway and Ninth Street, between the black community’s two most significant landmarks – Bethel African American Episcopal Church and the Mosaic Templars Building – rioting whites used pews seized from the church to ignite a huge bonfire on the trolley tracks.  They threw Mr. Carter’s body onto the raging fire, which burned for the next three hours.

And courts, law enforcement and the federal government failed to act.

In February 1898, a white mob in Lake City South Carolina, set fire to the home of the Baker family and riddled it with gunshots, killing Frazier Baker and his infant daughter, Julia, and leaving his wife and five surviving children wounded and traumatized.  Baker, a black man, had aroused the hatred of the predominantly white community when President William McKinley appointed him to the position of local postmaster.  The murder prompted a national campaign of letter-writing, activism and advocacy, which ultimately persuaded President McKinley to order a federal investigation that resulted in the prosecution of eleven white men.  Despite ample evidence, an all-white jury refused to convict any of the defendants.

Or at worse, they offered support or cover.

President Theodore Roosevelt declared that “the greatest existing cause of lynching is the perpetration, especially by black men, of the hideous crime of rape.”

Lynchings achieved their purpose by terrorizing black communities.  According to the U.S. Department of Labor, lynchings were a major cause of the exodus of more than six million black Americans from the South.  Within a single decade, the black populations of Georgia and South Carolina declined by 22 percent and 24 percent respectively.  In a letter from one black migrant:

After twenty years of seeing my people lynched for any offense from spitting on a sidewalk to stealing a mule, I made up my mind that I would turn the prow of my ship toward the part of the country where the people at least made a pretense of being civilized.

The museum that EJI has built in downtown Montgomery provides a means to delve more deeply into this history.  As described by Campbell Robertson in the New York Times, “It is not a conventional museum, heavy on artifacts and detached commentary. It is perhaps better described as the presentation of an argument, supported by firsthand accounts and contemporary documents, that the slavery system did not end but evolved: from the family-shattering domestic slave trade to the decades of lynching terror, to the suffocating segregation of Jim Crow to the age of mass incarceration in which we now live.” 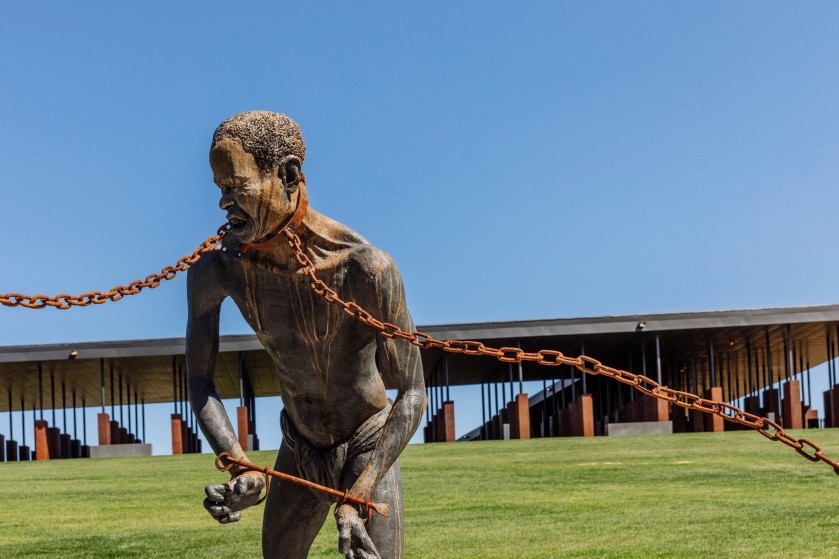 We were shaken to our core after our immersion in the memorial and museum but there is hope and it came from one of the death row convicts who was wrongly convicted by an all-white jury and spent 28 years on death row before EJI gained his freedom.  In the words of Anthony Ray Hinton:

I refuse to believe that it’s hopeless because I am a product of what can happen when you fight,” he said. “If we don’t fight, who’s going to fight?

With that inspiration, there is much more to learn and action to be taken.  For a detailed report, go to Lynching in America: Confronting the Legacy of Racial Terror by the Equal Justice Initiative.  For counties where lynchings were carried out, “EJI is working with communities to commemorate and recognize the traumatic era of lynching by collecting soil from lynching sites across the country and erecting historical markers in these spaces.”  Duplicates of each steel column were also crafted to serve as memorials should localities be willing to erect them and address the history of injustice.  For an interactive map of lynchings, go to this page on EJI’s Website and see if you can spur your community to open this door on its past.

5 thoughts on “Conspicuously Silent . . . No Longer”